I recently went on a Vision Trip through Global Orphan Project to Haiti with my son. We were unsure whether we would be able to go due to recent riots and flights canceled into the country. When word came through that we were indeed able to go, I was hesitant out of fear and my heart was unwilling to make the journey.

As our departure day came near, my heart was challenged to seek Him within the Haitian people. I had no idea what He wanted to unfold before me nor how He would reveal Himself through His children. Let’s just say; He never ceases to amaze me on how He manifests His presence throughout creation. It is true that He is never changing, but the way He is revealed is always different but none the less awe-inspiring.

Haiti is known for its extreme poverty and large amounts of orphaned children. However, many orphans have families that come to see and spend time with them in the orphanages, they just cannot afford to care for them. It would not only devastate the child to be adopted and their families but the “momma’s” who care for them in the orphanages. They love them as though they were their own. This within itself causes one to pause and take note. I would gladly take many home, however, their place is in Haiti. How can this be God’s best for them? It seems so unfair! I felt a pressing upon my heart reminding me that His heart is for orphans and for family. He has a way and a plan. That’s when my vision began to reveal something new.

We spent a few days in the orphanages playing with the children. My heart melted each time at the sound of my name in a native tongue. The children, eager for our arrival, surrounded us as we stepped off the bus. They were not shy as several would claim us as their own. Some even fought over us! Ohh the vision the Father painted reminding me that He surrounds me with His feathers, has claimed me as His very own and He fights for me.

Pride for Gods Word was revealed as the children gave evidence to the fact that they loved their Haitian Bibles! There are some things from the Bible the sound the same in any language such as “Papa” for God and “Jezi” for Jesus. We were allowed to take pictures and video of the children as we prepared to leave. Do you know what they wanted to show on video? Their Bibles! Such pride and love for God ‘s Word and they wanted others to see that! Their Bibles are a priceless treasure that brought conviction to this heart as it revealed how I’m scared to speak about God outside of comfort groups let alone show my Bible to others. Yet, these beautiful children wanted everyone to see and know their love for His Word!

The Lord also spoke to me in a church service and later a revival we were invited to attend. I saw many tears freely fall from faces of both the young and old in attendance. I saw hands and arms unashamed lifted high to the King of Kings praising Him. I heard their voices join together in worship leaving a lasting imprint etched in my memory…..ohh my! The pureness in heart was overwhelming! Then to see the overflowing joy fill their eyes as we joined them in singing hymns we knew. Oh so priceless!

We also enjoyed communion. The words, “Participate! Participate!” poured from the children as they herded us from the pews to the aisles. Communion was relational to them and they wanted us to take part in that relationship much like our Father wants us to engage in a relationship with Him.

While our cultures are much different, I’m beginning to see not everything in cultures opposite of mine are bad. Each have their share of priceless beauty and darkness that overshadows good being done leaving us to wonder if God is even there. We tend to forget that just as people are unique, special and have their own beauty from ashes to share, so does each country. Jesus is in Haiti just as a sweet little boy wrote in my Bible. There is much evidence giving testament to that fact. I not only was able to see where God was but His place! He is King in the hearts of His people and they believe as my friend also wrote in my Bible that He is the best King ever.

I’m so thankful for the opportunity to share in this vision not to mention the evidence of God’s presence. Haiti is truly a papillon (butterfly) unfolding its beautiful wings through the love of God, its people and its future. 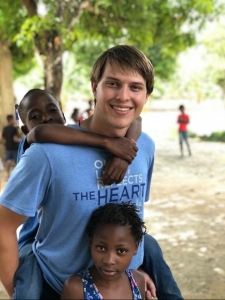 For more information on the Global Orphan Project and ways to support families through fair trade purchasing or to participate in vision trips, please click the links below