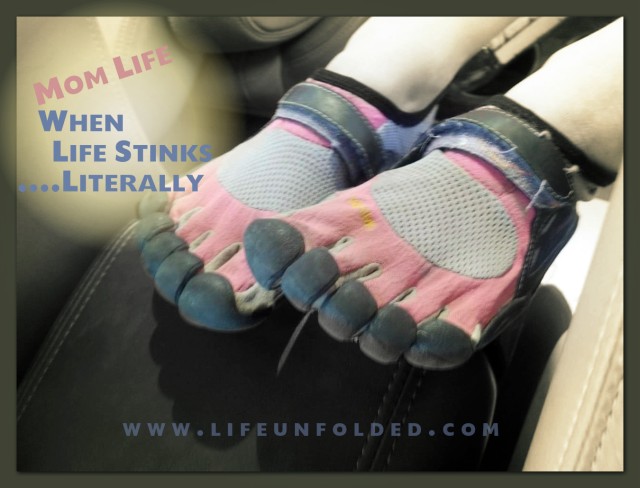 Sometimes in Mom Life we experience things with our children that are well….lets just say some days can reek to high heaven especially when in the public eye. I’ve had several instances as a mom when going to the store was like a box of chocolates. I didn’t know what behavior I was going to get; sweet, dreamy and smooth or dark and foul racing to the exit! While we experienced many good store runs its “the others” that caused people to follow us throughout the store, point fingers, and give us glares of shame and judgment. Then enters the crème de la crème that dreaded check-out line! It brings you front and center! There is no escape, you are there until the transaction is complete and your momma nerves in addition to your children come unwound like a spool of thread! What is it about the check-out line that drives kids of all ages to insanity?

We had one occasion that didn’t happen in the check-out lane!  Bonus! However, this tops the charts of our store excursions. Several years ago, we went to a store for what was supposed to be a short jaunt to the shoe section and then right back out.  As we walked towards the shoes we noticed a very foul odor that seemed to follow us wherever we went.

That my friends, is when everything unraveled and we quickly became the target!

What started out as soft giggles and hushed whispers unraveled to loud, boisterous yells of  “She/He farted!” and “She/He pooped their pants!”  Their voices trailed throughout the store as they began running from the smell and hiding in clothes racks.  I stood in shock and horror to what was unraveling before my eyes! Surely this wasn’t happening!

Gathering them closer and looking into their eyes with the meanest mom eyes I could muster, I began giving them the “what for”.  Only a few words left my mouth when my eyes began to water from the horrible odor which indeed came from one of my children. I reluctantly began smelling bottoms, arm pits, asking questions of who needed to go to the bathroom, who forgot to wipe or change their underwear. Their laugher became hysterical with every question and we began drawing a crowd! I tried to leave, I tried to calm them down but nothing I did moved them any closer to the store exit. Several women came by offering glares of disapproval at the commotion being caused, not to mention the soul piercing, shameful glares directed at me for not controlling them. Still others parked their carts a little way down watching as we unraveled in the middle of the store.

The culprit of the horrific smell was discovered shortly after. My youngest loved wearing Toe Shoes, you know, the kind that fit like gloves for your feet. The smell was so putrid, it was as though something had crawled in them and died. Where was that smell beforehand? It sure wasn’t present during the ride to the store! By this time, they were so loud, the employees started to take notice. I honestly thought we were going to get kicked out!  Finally able to get my darlings gathered, we rushed out the store.

On the way home, we rolled down all the windows to no avail. The smell settled like a heavy mist suffocating any fresh air there was.  There was no driving fast enough to vacate the awful smell. It gets worse, my eldest daughter began vomiting out the window, my son and I were on the verge of doing the same. It was that bad! I began to cry from what just transpired; all the while my littlest just laughed and laughed. What a stinker……literally!

Once home, the shoes thrown away and surrounded by clean air, I sat in embarrassment and anger at what unfolded in the store. I ran through all the coulda, shoulda, woulda’s in my head of a “good mom” when I felt the Lord place a large dose of humility on my heart.

Sometimes things in life just happen that can’t be explained let alone understood. When we choose to condemn and judge someone without the slightest bit of humility or compassion for those the spotlight is on; we get nowhere real fast. While we are all too aware of the, “I’d nevers” spoken, we easily forget, we too have said them. We also have had bad things happen that weren’t  on public display.   Instead of offering empathy, we join in the tearing down of others and rise ourselves up.

It’s easy to say what we could, should, or would do in a situation, however, we need to be completely honest in our self-reflection.  When the shoe is on the other foot,  can we do the things we said others should do in their situation?  We’d like to think so but the truth is, we honestly don’t know!  What we do want more than anything is  grace for ourselves and judgment for who the spotlight is on.  That stinks!

There will never be the vast amount of laundry detergent or bleach needed to kill the smell that lingers when life unfolds for all to see. That’s just the way of the world. Take heart and know Jesus is there with you every step of the way. He does not condemn nor does He shame. He doesn’t throw us away or say you are never good enough.  His love ran red for where you’ve been, you are, and where you will be.  He does not change and loves you unconditionally. Take His hand and fix your eyes upon Him!  He’s the only one with the detergent needed to cleanse and wash away the smell of this world making you as white as snow.